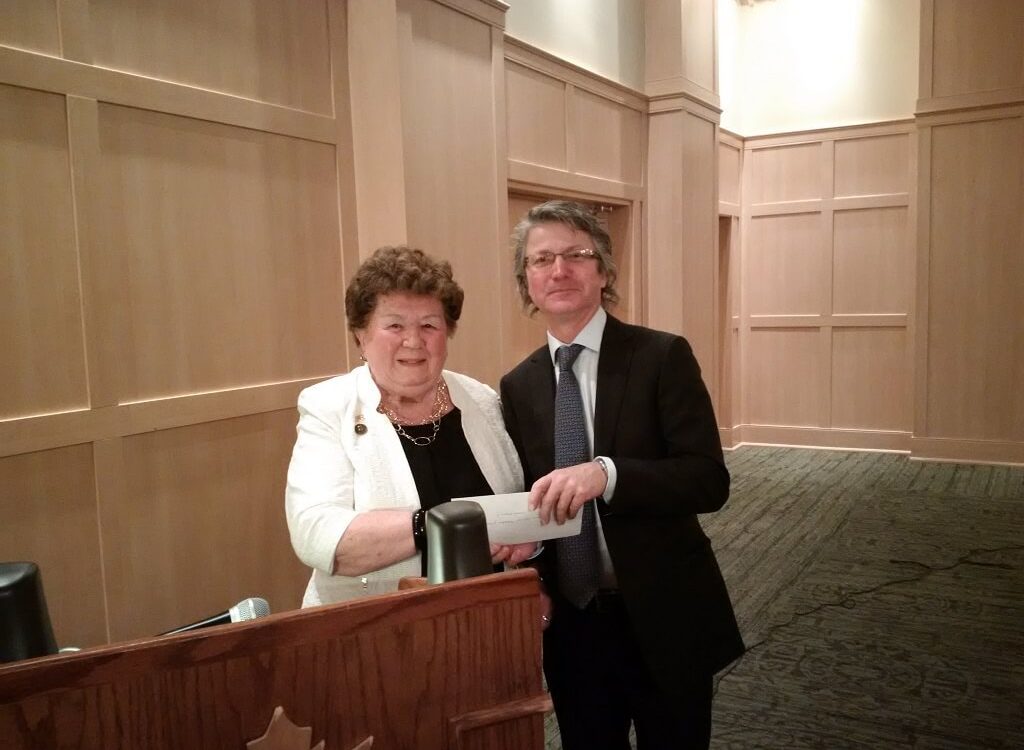 Ever since its establishment in 1934, the Ukrainian Women’s Organization of Canada (OYK) Toronto Branch has been arranging its Christmas-time Spilna Sviata Vecheria. This year, the Vecheria was held on Sunday, January 15th at the UNF Hall, 145 Evans Ave. The event was well attended with more than 100 guests enjoying a traditional Ukrainian Christmas Eve meal and taking part in Christmas caroling. As the Branch’s President, Dianna Fedun, told New Pathway, many Ukrainian families in our community do not celebrate a traditional Christmas, and the Branch strives to help them to maintain the custom: “The wives of some of our UNF members have passed away and their children are not celebrating Sviata Vecheria at home. But they still want to keep the Ukrainian custom of sharing with family and friends the traditional meal of kutia, borshch, fish, varenyky and holubtsi – so they come to our Spilna Sviata Vecheria.”

This year, our program began with a warm welcome from MC Natalia Obal, and prayers, blessings and greetings from Rev. Ostap Chorniy. Our Boyan Choir, directed by Natalia Fuchylo, entertained the guests with their lovely Ukrainian kolyadky and schedrivky. Following dinner, under the direction of choreographer and dancer Stefan Kuziw and with the help of UNF Toronto’s Director of Programming Anastasia Baczynskyj, the UNF Branch’s renewed Kalyna dancing group performed a colourful Vertep. Mary Pidkowich, president of the Olzhych Foundation and a long-time member of OYK Toronto, brought greetings and a pleasant surprise in the form of a $15,000 cheque presented to Greg Adamowich, UNF Toronto’s Vice President, to support the organization’s future activities. UNYF (MYHO) Toronto’s President, Yuri Dunets, delighted everyone with a beautiful poetic Ukrainian greeting.

UWOC (OYK) Toronto is one of the most active UNF affiliates. Since their “Autumn Afternoon” in October 2016 (reported in New Pathway), they held a “Winter Wonderland” Bingo. Proceeds from these and other events support various charitable organizations and community agencies both in Ukraine and Canada, including Ukrainian Canadian Congress, Help Us Help the Children, Dzherelo Children’s Rehabilitation Centre in Lviv, Toronto’s Ukrainian Canadian Care Centre, Women’s Habitat for abused women and children, LAMP program for children and young mothers, Dorothy Ley Hospice, and Out of the Cold shelter for the homeless.