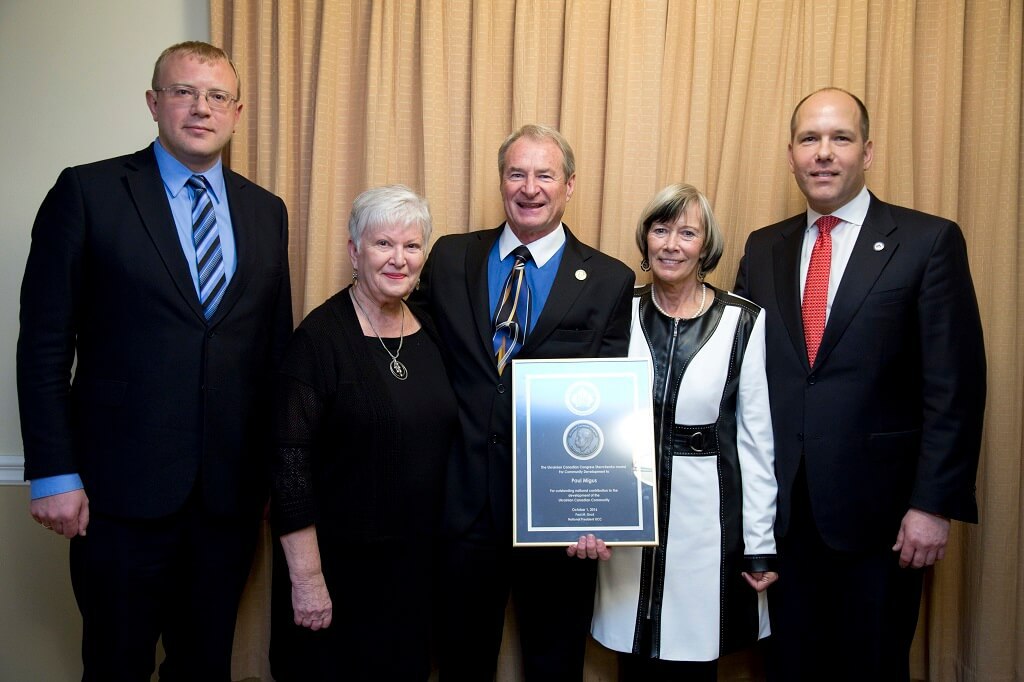 To present the medal, Paul Grod, President of UCC flew in from Toronto. The Ambassador of Ukraine, Andriy Shevchenko, offered congratulations to Paul for his outstanding work. Other UCC executive members present were Ihor Michalchyshyn, CEO and Director of UCC-Ottawa, as well as Connor Moen, SUSK-UCC Representative and Orest Zakydalsky, UCC Political Analyst.

Paul Migus was born in Toronto of Ukrainian parents and grew up in the now famous Ukrainian Bloor West village. He came to Ottawa to do a Master’s in Arts degree at the University of Ottawa with a thesis “Ukrainian-Canadian Youth organisations, 1893-1953” under the supervision of Senator Paul Yuzyk. He starting working for the federal government as a clerk and rose to the level of Assistant Deputy Minister in the Canadian Government. He also served two Cabinet Ministers of Multiculturalism.

Paul has been active in the Ukrainian Canadian community in Toronto and Ottawa for over 50 years. He has occupied leadership roles in the Ukrainian National Youth Federation, and the Ukrainian National Federation of Canada (notably, as our UNF-OG president from 2009-2013). As a director of the UNF Paul Yuzyk Institute for Youth Leadership (PYI) he delivers the “Parliamentary Forum” for Ukrainian-Canadian students, teaching students how Canada is governed and the leadership role played by Ukrainian-Canadians in the creation, adoption and implementation of Canadian multiculturalism. Paul has been a member of Plast, SUSK, the Kalyna Dance Ensemble, the Ukrainian Professional and Business Association, and the Ukrainian Greek Catholic Church. He is the author of “Ukrainian Canadian Youth: A History of Organizational Life in Canada”; a founder of the Canadian Ethnic Studies Association, and the editor of “Sounds Canadian: Languages and Culture in Multi-ethnic Society”. His more recent involvement includes assisting the Ukrainian Canadian Congress as Director, Government Relations. Paul also provides leadership to the UCC Canada-Ukraine Advisory Committee which shares advice with the Government of Canada through meetings with ministers of Cabinet and Senior Public Service Executives.

Paul is retired from the Government and currently manages his own consulting business: LGT Executive Performance Inc. Over the past 5 years, Paul has been helping the Government of Ukraine introduce public administration reforms leading to association membership with the European Union. After Putin’s invasion of Ukraine, Paul was an advisor to the Minister of Finance and the Minister of Economic Development and Trade. He has met the Prime Minister and President of Ukraine and held discussions with their senior advisors about reforms to their Public Service and Administration.

In 2016, Paul met with the Ukrainian Minister responsible for the Prime Minister’s Cabinet of Ministers, and also with the Head of the Ukraine’s new Legal Aid organisation under the Minister of Justice. He also helped to organize a 16-person delegation mission from Ukraine to meet with all 4 levels of government in Canada to better understand reforms for administrative services to be introduced in Ukraine by the Minister of Economic Development and Trade.

We were very fortunate to have Paul at our UNF-OG 2015 AGM speaking about “Peace, Order and Good Government”. On January 26, 2017, he spoke about “Improving Governance in Ukraine: An Update on Public Administration Reforms”.