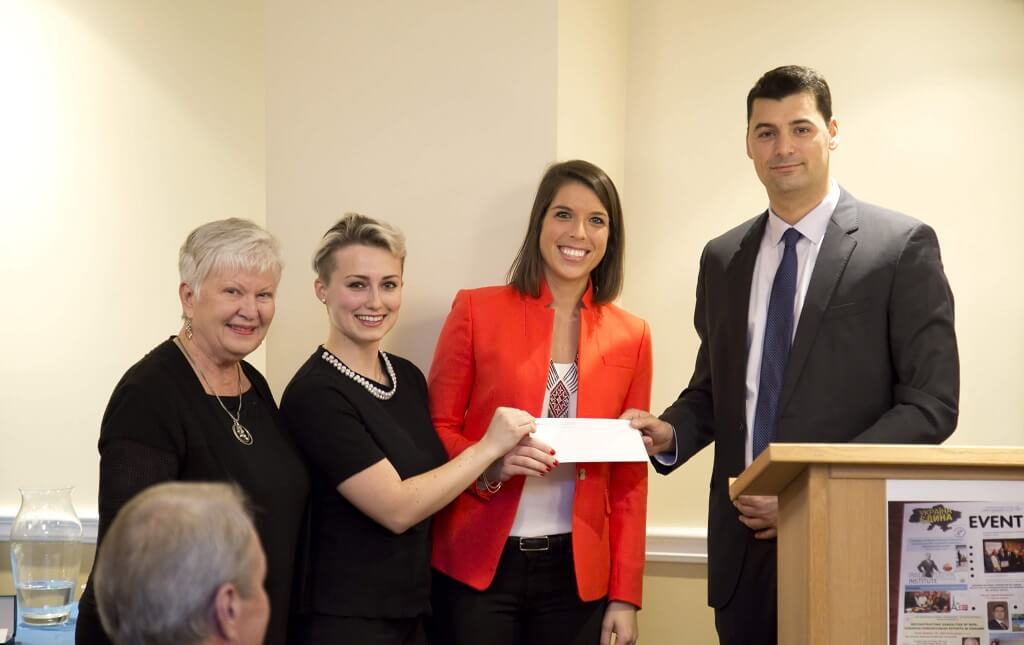 UCC President Paul Grod and Mr. Andriy Shevchenko, Ambassador of Ukraine to Canada opened the meeting by a special presentation of the Taras Shevchenko Medal for Community Building to former UNF-OG president Paul Migus. This honour – the highest given to any Ukrainian Canadian – pays tribute to Mr. Migus’s dedication to the Paul Yuzyk Institute for Youth Leadership, as well as his longstanding and steadfast support of Ukraine through his work with the Canadian and Ukrainian governments and the Ukrainian Canadian Congress. Mr. Migus was also the keynote speaker of the evening with a stimulating discussion on “Improving Governance in Ukraine: An Update on Public Administrative Reforms.”

Vicki Karpiak, outgoing UNF-OG president, officially started the program with a welcome address highlighting the many achievements of the last year. These included a “Professional Networking Night”, a screening of “I am a Ukrainian” at the Ukrainian Embassy in Ottawa, assisting the Paul Yuzyk Institute for Youth Leadership to take nine young leaders from across Canada through Europe, as well as taking part in the Capital Ukrainian Festival. Two major events were a fundraiser for Dr. Oleh Antonyshyn’s medical missions in Ukraine. In it, the Ottawa Ukrainian community raised close to $10,000, and the much anticipated “Meet and Greet with Stephen Poloz – Governor of the Bank of Canada”. Ms. Karpiak graciously thanked her hard-working executive for a very successful year. Ms. Karpiak was presented with a painting of a church in Western Ukraine in recognition of her commitment and contribution to making UNF-OG a success.

The program then turned to the election of the new 2017 executive. A slate of officers was presented and 12 executive members were elected with a majority vote. A number of young and enthusiastic new executive members join the newly-elected co-presidents Dr. Melania Buba and Katie Wyslocky, who are sure to bring new energy and ideas to the organization, as well as a number of returning executive members who will provide continuity and support. Dr. Buba, a paediatrician at the Children’s Hospital of Eastern Ontario, and Ms. Wyslocky, a cyber-security analyst for the Treasury Board of Canada and 2015 UNF-OG Summer Student, were also members of the outgoing executive.

The highlight of the evening came with a surprise presentation of $10,000 to UNF-OG from the Ukrainian Credit Union (UCU). UCU Ottawa branch financial services representative Janko Radojicic presented the cheque on behalf of Taras Pidzamecky, UCU Chief Executive Officer, who was not present due to other commitments. This very generous donation will be used to fund future programming and initiatives that will benefit all UNF-OG members. It will also help facilitate a number of special events planned on the occasion of the 150th anniversary of Canada. UNF-OG is extremely grateful to UCU for their continued support, and look forward to building on our existing relationship.

The AGM concluded with a social hour, hors d’oeuvres and beverages.