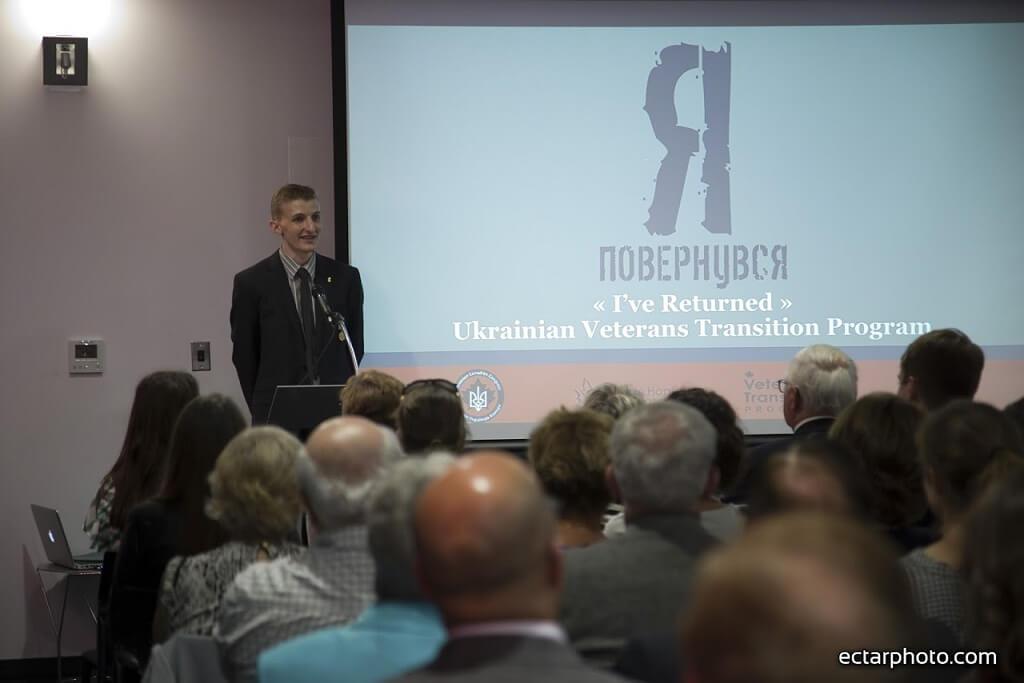 For the 4th year in Ottawa-Gatineau, UNF hosted yet another successful fundraiser. Dr. Melania Buba, co-President of UNF-OG, welcomed a group of 60 individuals on June 28, 2017. “This year, we chose to assist war veterans in Ukraine suffering from PTSD, and their families,” she stated. There is a growing and immediate need in Ukraine for this program. This evening will provide insights into war trauma and PTSD.

Sofiya Kominko, UNF branch secretary, proposed and organized this project, when she learned about the Veterans Transnational Program developed by researchers and clinicians from the University of British Columbia in 1997. The Maple Hope Foundation, in collaboration with VTP Canada has undertaken to transfer this uniquely Canadian and sustainable program to Ukraine. Dr. Daria Shewchuk delivered an intensive 2-week course in Kyiv, and seeks to establish a self-sustaining Veterans Transnational Network in Ukraine by 2019. Such programs are vital to the well-being of Ukrainian society, as there is a scarcity of rehabilitative resources presently available in Ukraine.

The VTP program is about veterans helping veterans, led by psychologists. Of the 650 veterans, who went through the program, 90% reported positive results and the suicide rate was “O”. 53% recovered from severe depression and 72% were able to leave the course with new career goals, reported Denis Polishchuk (Carpathian Sich – Advocate for the Veterans Network in Ukraine). Denis delivered a thought-provoking Power Point presentation to the gathering of 60 people on June 28th at the ALT Hotel in downtown Ottawa. Denis is himself an exceptional 23-year-old Canadian, born in Ukraine, who chose to serve for 4 months, on the front, to defend Ukraine. He is contemplating returning to Ukraine to once be in service in the army.

According to Ukraine’s Ministry of Defence, non –combat casualties of the Ukrainian Army have exceeded 3,000, of them several hundred were suicide. Total casualties exceed 10,000, with more than 20,000 injured. According to the Ukrainian Research Institute of Social Psychiatry, 50% of Ukrainian veterans require psychological help, 20% suffer from severe PTSD.

Thanks go out to the Canada-Ukraine Foundation for providing tax-deductible receipts to our generous donors.

UNF-OG challenges each of the 13 UNF branches across Canada to dedicate one evening to supporting this proven method of assisting victims of war in Ukraine and their families.