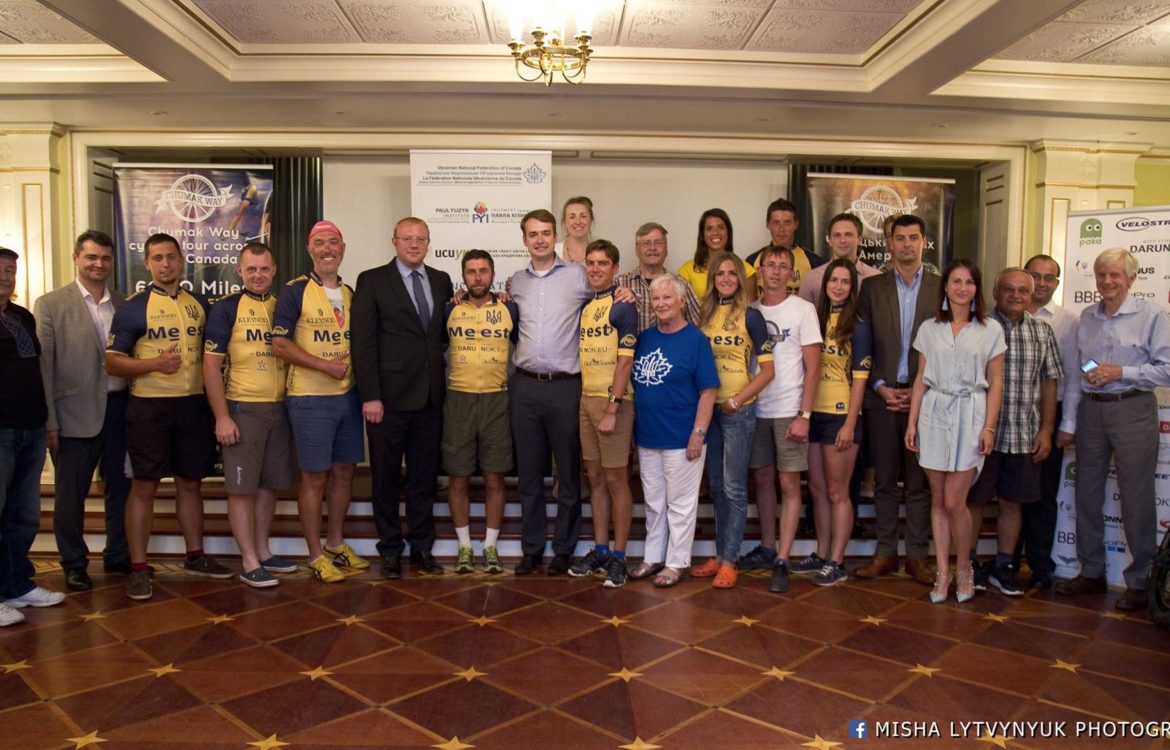 We would like to share with you an article written by one of our very own UNF O-G members, Mr. Vilyen Pidgornyy, on the Chumak Way cycling tour event in Ottawa. We really appreciate the support and the contribution of all our members, and would like to encourage further initiatives, ideas and contributions. Please find the article below as well as the picture of UNF O-G members who attended the event attached. 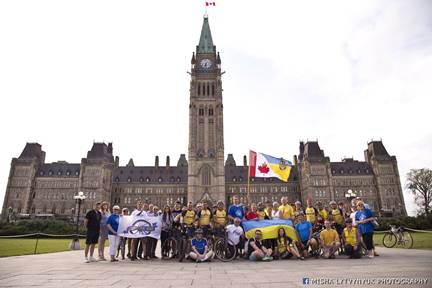 On August 9, 2018, Ottawa welcomed the participants of the first ever *Chumak Way cycling tour that goes through the two countries of the North American continent. This is no regular bike journey but a meticulously planned 10,000 km trip through the U.S. and Canada with stopovers in more than 400 cities during the 100 days. In Canada, the route specifically targeted the cities with the largest population of Ukrainian diaspora – Vancouver, Calgary, Edmonton, Winnipeg, Regina, Toronto, Ottawa, and Montreal.

It was very encouraging to see the local Ukrainian community including the Ottawa-Gatineau branch of UNF and the embassy of Ukraine working together greeting the cyclists near the Canadian parliament and organizing the reception the next day which was attended by more than 70 active community members and key opinion leaders. During the reception, the members of the Chumak Way tour introduced themselves and explained how the project came to be and what was their motivation to join the team. They thanked the audience for supporting Ukraine at the time of great need.

The team consists of 10 volunteers including the two veterans of the war in eastern Ukraine and two female members. They come from all walks of life, yet they are united by the love of cycling, adventure and devotion to the motherland.

The objective of the tour is to raise awareness about Ukraine as a country that despite being invaded by the Russian Federation that had also annexed the Ukrainian Crimean peninsula in 2014, regardless of the Chernobyl tragedy and infamous corruption, remains the birthplace of talented and brave people, innovative technology, and immense potential. They urged the international audience to visit Ukraine, the largest country in Europe and see with their own eyes what it was all about. Another goal of their tour is to find outstanding Canadians and Americans of Ukrainian origin who could share their achievement and motivational stories with the people back in Ukraine.

After the official ceremony, the project participants were eager to introduce several Ukrainian innovations that they brought along. They gladly explained the intricacies of riding the Delfast e-bike, listed in the Guinness book of world records, that runs 380 km on one charge, invented and produced by the Ukrainian startup. They showcased Woodrover – a bicycle with the wooden frame as well as Eney – the first lightest track bike in the world (under 4 kg) produced in the 1980s by the Antonov Design Bureau – famous Ukrainian aircraft manufacturing and services enterprise that also produced the world’s largest AN-225 Mriya aircraft.

You could see with the naked eye the interest this openness raised among guests. Some of the locals have decided even to join the Chumak Way cyclists for a short ride-along the next morning when the team departed for Montreal.

“This was just one of the vivid examples of the Ukrainian National Federation’s Ottawa-Gatineau branch (UNF O-G) activities and strong community partnerships, including the cooperation with the Embassy of Ukraine in Ottawa. Moreover, this community outreach event perfectly aligns with one of the UNF objectives – promotion of accurate information about Ukraine,” said Anatoliy Shatkovskyy, President of UNF O-G branch. According to Mr. Shatkovskyy, who was elected to this executive position earlier this year, the Ukrainian cyclists embody the spirit of Ukraine by wanting peace and advocating for sustainability, which is similar to what UNF is promoting on top of uniting and empowering the Ukrainian community in Canada.

There are more events to come. More stories to tell. And although the ideas to organize this or that event, as a rule, come unexpectedly, they are all related to Ukraine and its legacy that lives in those of us who associate themselves with Ukraine, its culture, traditions, and history.

And it is a rich one for that matter, wouldn’t you agree?

If you feel like we need to explore some issues or subjects feel free to share your ideas with the UNF O-G branch and become a volunteer for our next event.

*Interestingly, Chumak Way is the name of our universe in Ukrainian – [Chumatskiy Shliakh – Ed], same as Milky Way in English or Silver River in Chinese. According to some legends it received its name during the ancient times when the traders who were known as chumaky who lived on the territory of modern-day Ukraine went a long way to Crimean peninsula to buy salt. While en route they would navigate using the stars – hence chumak way.