Anne Fedun (Toronto) and Slava Yopyk (Edmonton) were awarded the “Берегиня Українського Народу” Award during the 70th Anniversary Celebrations of the World Federation of Ukrainian Women’s Organizations (СВУЖО) in Toronto. 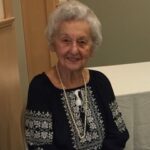 Anne Fedun was born to immigrant parents and raised in Toronto. Her introduction to volunteering came when she became a Ukrainian National Youth Federation (UNYF) member, an affiliate of Ukrainian National Federation of Canada at the age of 14. Her time was given helping younger children in the Ukrainian dance and singing program of the UNF Toronto. She then married and started her family as did many of her friends from UNYF.

By 1958, she returned to the organization and joined Ukrainian Women’s Organization of Canada-Toronto Branch (OYK). Under the tutelage of both Past Presidents Pani Zayats and Pani Prociw, she was brought into the Toronto Branch Executive’s Cultural Committee in 1962. She has remained on the OYK Toronto Branch Executive since 1962 taking on positions as Vice President, Recording Secretary, Executive Member, Audit, Visitation and Anniversary Committees. She currently holds the position of Treasurer.

In 1965 St. John the Baptist Chapel was built at UNF Camp Sokil, Hawkestone, Ontario. Mrs. Fedun assisted Pani Ada Didulka with Chapel duties from 1966 until she took over in 1988. Mrs. Fedun remains as the custodian of the Chapel on behalf of OYK-Toronto.

In 2010 she was recognized by Ontario Volunteer Service Award with her 50-year service pin. For the past 10 years Mrs. Fedun has been a valued member of, and continues to serve on the OYK National Executive. 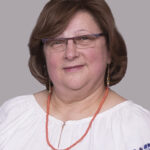 Slava Yopyk has the ability to recognize a need and has a commitment to getting things done which has led to a lifetime of volunteer activities. She currently devotes her time to various community organizations through the Edmonton Region. Her volunteer accomplishments made and continue to make a significant difference to the lives of many in the community. She embodies the spirit of volunteerism.

Slava was and continues to be a very active member and volunteer within the Ukrainian hromada/community in Edmonton. She continues to promote culture and educational programs throughout the community. Her leadership is in full evidence; the organization is a phenomenal success with a growing membership. She saw a need and set forth to lead the organization into the 21st century and in doing so has enriched the community and the Ukrainian Women’s Organization of Canada – Edmonton Branch as President from 1990 to 1991 and from 2013 to 2017 years.

We often coin the phrase “youth of today are our future, our leaders in the future” and Slava Yopyk’s work as one of the founding members of the Ukrainian Children’s Studio Theatre “Dzherelo” has inspired the future/the new generation; they will have the knowledge to go forward and continue with the work started before them ensuring the continuation of Ukrainian traditions and language.

At a professional level Slava Yopyk achieved her nursing and sonographer degree and has been employed as a diagnostic medical sonographer for over 24 years.

Slava Yopyk is a true leader with a vision – a Woman for all Seasons.