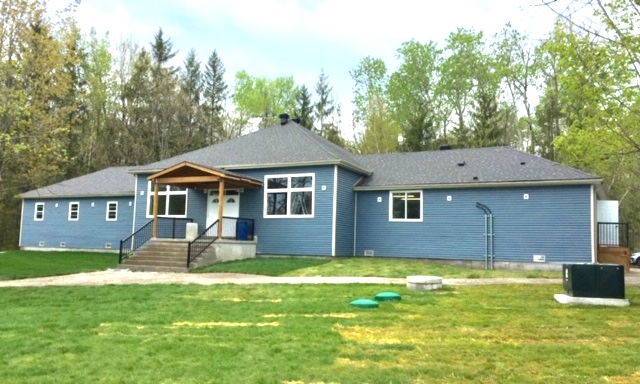 As UNF Camp Sokil prepared for its 60th Anniversary and 3rd generation of Campers, it became abundantly clear that a new Kitchen facility could not be delayed any longer. So in September of 2018, work crews arrived to begin this monumental task.

First and foremost, it was necessary to provide a more solid foundation for the structure as the building techniques implemented in the 60’s were no longer acceptable. The entire structure was carefully raised over 6 feet to allow the workmen to dig down and around in order to install a proper concrete block foundation. The kitchen was then carefully lowered down to rest on its new base.

Interior and exterior siding was replaced, the rafters were cleaned out, new flooring and tiling was installed both in the kitchen and the general area. The entire structure was winterized. New appliances have been installed and sleeping quarters for the Camp Director and Kitchen Staff have been updated to provide direct access to the interior.

The Kitchen is now almost completely finished and will be ready to welcome a new flock of campers this summer.

Many thanks to the numerous volunteers of UNF Toronto that came out tirelessly to help complete this labour of love.