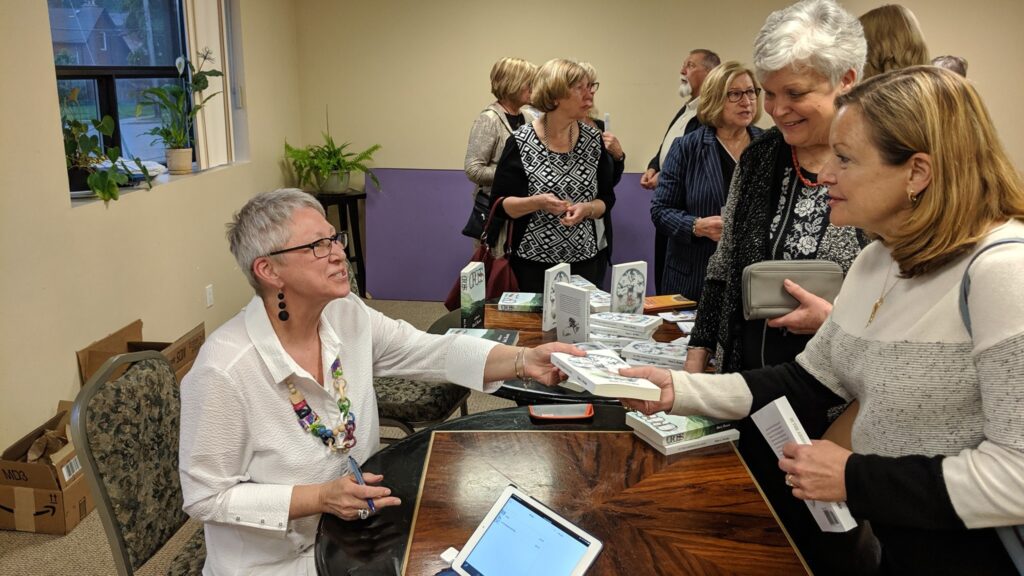 Kim Drake was born and raised in Toronto and now resides in the Ottawa Region with her husband, Brad Weaver. She is the daughter of +Myrna Drake and granddaughter to +Pani Justyna (Evhenia) Bedry, who was a founding member of the ‘Divochi Hurtok’ established in 1930.  Members of this original group of young women worked very hard for our organization and took an active role in helping it to develop and grow into what UWOC is today.

Kim grew up taking part in all that the organization had to offer. Indeed, she has come full circle and is delighted to be back once again in her old stomping grounds, celebrating her success within the Ukrainian community she was raised in.

She is the mother of two children; her son, Matthew, who lives and works north of Toronto, and daughter, Taylor, who is a social worker in Halifax.

She has been creating, writing, and storytelling for over thirty years.  She previously authored, CROSS, a story of struggle, love and redemption. Kim has also published an exclusive book of poems, entitled WINTER SOLSTICE, and has had her poetry published in various poetry anthologies.

Her latest endeavour was realized this year with the publishing of her second novel, In The Absence of Ants.

Kim gave an exceptional reading from her book ‘In The Absence of Ants’ and her husband Brad Weaver assisted in speaking a part too. An Oscar winning moment. The story is profound, given more family members are dealing with loved ones with Alzheimer’s or Dementia. The book draws you into the thoughts of those afflicted with ‘Al’ and how families deal and reconcile with those who are struggling.   After the reading Kim had a book signing while 50 guests enjoyed some light refreshments and socializing. Partial proceeds from the sale of her books will be donated to the Alzheimer’s Society.

UWOC-Toronto held a 50/50 whereby one of our members Natalie Obal won $105. UWOC-Toronto will also donate $200 to the Alzheimer’s Society.