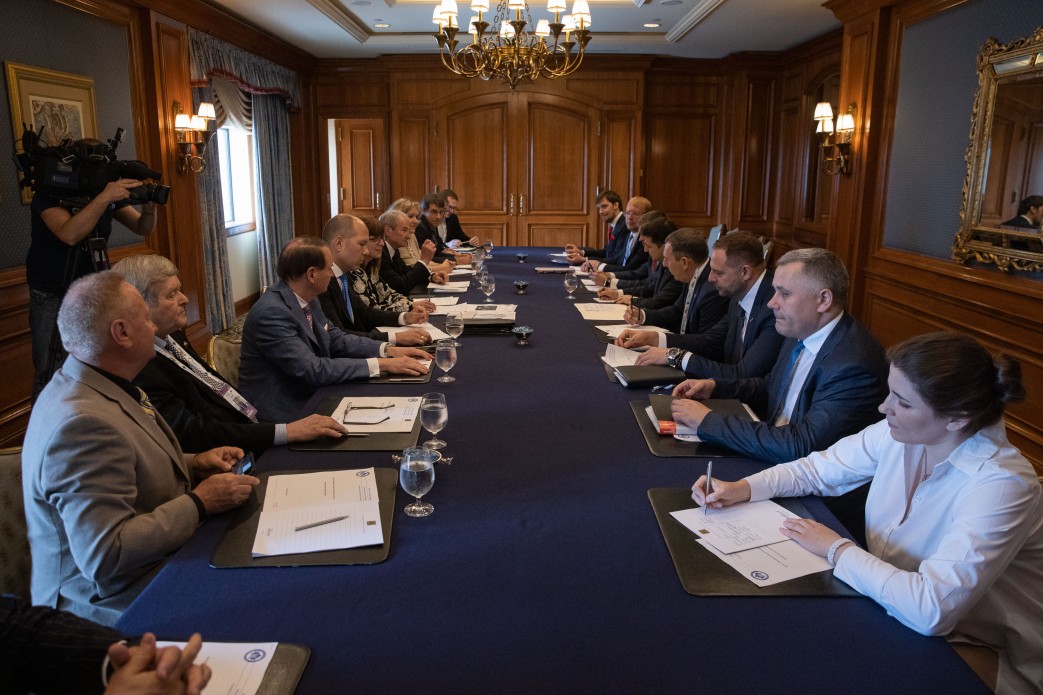 The Conference’s objectives were to review the reforms undertaken, in particular since the 2014 “Revolution of Dignity”, and the successes of these reforms, together with taking stock of the current context, challenges and opportunities. The Conference was followed by a day and a half series of plenaries, workshops, displays and networking opportunities hosted and organized into a “Ukraine House” by Daniel Bilak of Kyiv, and Global Affairs Canada.

The highlight of the Summit was the participation of Ukraine’s new President, Volodymyr Zelenskyy, and Canada’s Prime Minister, Justin Trudeau, both who addressed the delegates and spoke at the banquet on July 2. Their speeches were inspirational, reflecting on the strong ties between Canada and Ukraine, and the commitment to continue to deepen and strengthen this relationship.

Overview of Conference
The Third Reform Conference highlighted that there has been more reform undertaken in Ukraine in the past five years than in the previous 23 years, since independence was proclaimed in 1991. The major areas of these reforms include:

• Decentralization, providing more power, authority and funding levers to municipal levels of government, while also consolidating some 1000 villages and communities into larger municipal areas of governance;
• Macroeconomic stability including prudent fiscal and financial management, tax reform, deregulation and the revitalization of the Ukraine National Bank;
• Police reform, including the patrol police in which Canada has played a significant role;
• Military training and reform; the passage of the National Security Law; and implementation of a Legal Aid program;
• Health care reform, starting with citizens’ choice of doctors and readier access to medical assistance;
• Infrastructure upgrading; and
• Civil society growth and development.

Numerous speakers also identified three key challenges to these reforms: (i) Russian invasion of Crimea and the east, continuing aggression and violence against Ukrainians and Russian meddling in elections and civil discourse;(ii) corruption, in particular the need to undertake judicial reforms; and (iii) ordinary Ukrainians quality of life, including wages and benefits visibly increasing. Overarching these three challenges are unrealistic expectations from donors, investors and citizens themselves of the pace and timing of reforms.

Reform is considered to be the ‘best line of defence’ against these challenges, in particular Russia. However, many underlined the need to move these reforms from ‘paper’ to reality, providing tangible evidence to Ukrainians about what is changing and why, as well as the cost for these reforms. The Swedish representative suggested that Ukrainians needed to see a ‘reform dividend’ in order to continue to support what is happening. The IMF argued that improving infrastructure (developing a $4-5B fund), including roads, power supply, etc. as well as legal contracts governing infrastructure enhancements, was critical to further integrating Ukraine with Europe. “Being part of the EU supply chain through being able to ship parts, equipment, materials easily to and from Ukraine makes you part of the EU even if not yet legally.” And several speakers, including Ukraine’s Minister of Finance urged accelerating economic growth, noting Ukraine still has the lowest GDP in all of Europe ($3k EUs compared to $12k EUs). She noted that the rule of law is not yet strong enough, the size of government is still to large (in particular the number of government-owed state enterprises), and while $6B Euros in corruption was reduced, there is an immediate need to move the 10% portion of the GDP still controlled by oligarchs to 3%.

An enormous amount of money has flowed into Ukraine in support of reforms, from countries ranging from Poland, Finland, Luxembourg, Japan, Germany, the UK, Canada and the U.S. (among others) to institutions such as the IMF, World Bank, the OECD, etc. Each of these was represented at the Third Ukraine Reform Conference and each reiterated their unqualified support for continuing support of the reforms.

The overall thread throughout the conference was that real change is happening and is being embedded in Ukraine’s institutions and society, which is eagerly facing west and outward. There is renewed hope and expectations around the new President and the upcoming Parliamentary elections.

The new President concluded the Third Ukraine Reform Conference by thanking Canada, the Prime Minister and the Canadian diaspora for its friendship, support and leadership over the years in helping Ukraine. He articulately outlined his commitment to finding solutions to Russian aggression and invasion, to continuing the strong march westward in improving Ukraine’s prosperity and health, and to dealing with corruption. He spoke about his hope for the upcoming elections and being able to work with a new Prime Minister, Cabinet and agenda going forward.

The success of this Conference was due in large part to Global Affairs staff and, in particular, Canadian Conference organizer, Jill Sinclair (who was re-assigned from her role as Advisor to the Ukraine Minister
of Defence). Additionally, the testimonials solicited from the 39 donor countries and organizations underlined the strong international support Ukraine continues to have as it moves into a new presidential and parliamentary era.

Prior to attending the Conference, the Ukrainian President and his advisors met privately with representatives of UCC. The small delegation of ten included Paul Grod, President of the World Congress of Ukrainians; Alexandra Chyczij, UCC President; Paul Migus, UCC Volunteer Director of Government Relations; and UCC’s member organizations including the Ukrainian National Federation (Renata Roman), Ukrainian Credit Union (Slawko Borys) and UCC National Executive Director, Ihor Mychalchyshyn, among others. Sitting next to President Zelenskyy was the former Ukrainian Ambassador to Canada, Vadym Prystailko, who has been nominated by the President to become the Minster of Foreign Affairs for Ukraine.

Drawing from Ukraine’s President’s website relating to this meeting, it noted that the President emphasized the importance of supporting the Ukrainian language and the Euro-Atlantic course of the country. “The Constitution stipulates that the only official language in Ukraine is Ukrainian. As President and guarantor of the Constitution, I will defend the Ukrainian language, our sovereignty and our course towards Europe and NATO,” he said.