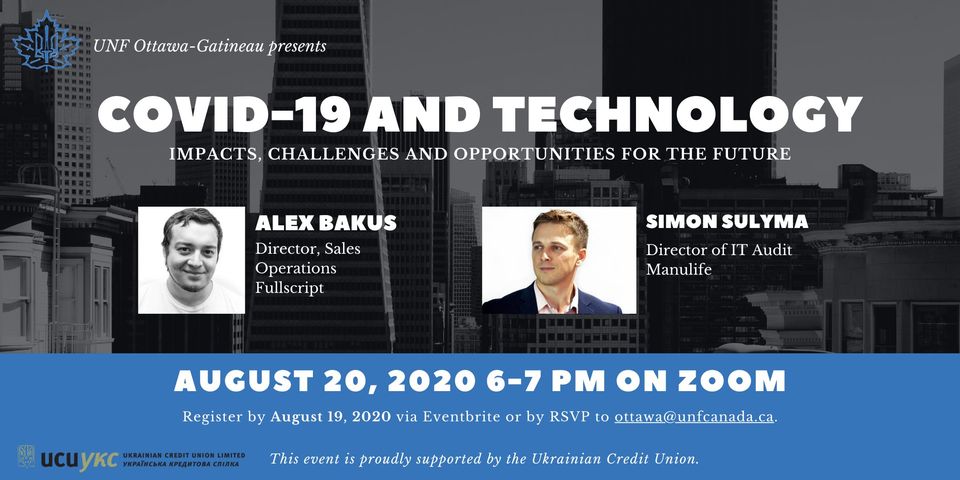 UNF Ottawa-Gatineau held another fascinating webinar on August 20th. The topic of this webinar was COVID-19 and Technology: Impacts, Challenges and Opportunities for the Future. The webinar was presented by Alex Bakus and Simon Sulyma. A great discussion was had that covered a wide range of topics including the ethics of AI, facial recognition and the risks of rapid adoption of digital technology. If you were unable to join the event, or would like to re-watch it, you can find the video here. Also, below is a an article written by Vilyen Pidgornyy detailing the event.

COVID-19 and Technology – A Cuss or a Bliss?
By Vilyen Pidgornyy for Ukrainian National Federation, Ottawa-Gatineau branch

On August 20, the Ukrainian National Federation’s Ottawa-Gatineau (UNF O-G) branch hosted a new webinar – COVID-19 and Technology: Impacts, Challenges and Opportunities for the Future. This was the sixth online events organized by UNF O-G executive team members since the beginning of the pandemic. The event featured Alex Bakus, Director of Sales Operations at Fullscript and an active member of the Ukrainian Canadian community in Ottawa, and Simon Sulyma, Director of IT Audit at Manulife and President of the UNF Ottawa-Gatineau branch.

Both experts spoke about the increased use of technology during the global pandemic and the impact it had on the economy, our lives and what to expect in the future. One of the observations of the speakers was that technologies had played a critical role in keeping the country functional; however, they couldn’t really name a single technology that didn’t exist before the COVID-19 pandemic. “If anything, this pandemic has accelerated the cross of new technological trends and those trends that were already happening before. Now we have more money poured into technology,” highlighted Simon Sulyma. Most of the technologies that existed pre-COVID, according to Alex, were “in a less scaled or less operationalized way.” One of the examples was Zoom application that had one or two million users pre-COVID and then almost overnight went to 20 million and then to more than 200 million [daily meeting participants – Ed.,] as reported by Alex. “We had this concept of video webinar, video chat but certainly now it’s becoming a completely new normal,” he emphasized.

Both experts have offered their opinion on how our use of technology had changed the way people shop, invest, study or even receive medical care. According to Simon Sulyma, people’s increasing trust in technology resulted in soaring valuation of big tech companies like Apple, for example, that doubled its valuation from USD 1 trillion to USD 2 trillion between March and August this year. This affected other industries such as retail, healthcare and education that had to undergo a rapid technological transformation to adjust to the new reality.

According to Alex e-commerce that represented about 10-12 percent of the volume [of the overall retail pie] in Western hemisphere and grew two to three percent every year on average, all of a sudden experienced 10 years of growth in a span of one year. “It went from low teens to 30 percent of all volume,” he said. In China, for example, during the lockdown about 80 percent of grocery purchase and delivery was done online, said Alex emphasizing that “once people transition to this new behavior it becomes the multichannel strategy where now it is a lot easier and a lot less friction to go online and start your e-commerce.”

“There is a huge rise in virtual care,” said Alex, contemplating that in the past “the whole medical industry was an anti-virtual practice.” Among the possible negative side, he talked about the future consequences of the currently increased usage of technology [messaging apps] including customer profiling and collecting data by larger conglomerates. “It doesn’t impact our experience right now, but we don’t know yet what is the unintended consequence into the future,” said Alex.

Among the jobs that are becoming popular because of the soaring use of technology the panelists mentioned AI (artificial intelligence) specialists, data scientists, and creative professions.

According to Simon Sulyma “20 years from now there is going to be 50 percent of the jobs that don’t exist right now.” Therefore, he advised to focus on building soft skills that are highly transferable.

When talking about the artificial intelligence both panelists mentioned that there were ethical considerations to be taken into account when using the technology – for example the trolley dilemma [an ethical problem of whether to sacrifice one person to save a larger number – Ed.] Interestingly enough, according to Alex a lot depends on the culture, reiterating that the algorithms have a lot of cultural bias attached to them. He mentioned that the algorithms are usually trained on the past data. “If we don’t intervene in these decisions the past data is going to continue self-propagating and, sort of, multiplying itself,” said Alex.

One of the examples was the attempt of Amazon to use algorithms in the hiring decisions. “They ran an algorithm to figure out who the successful hires were, comparing them to all the resumes they were getting and it turned out their algorithm was sexist, racist and [had] all kinds of biases in them because again it reflected the hiring practices that Amazon might have been perpetuated from the past so they killed the algorithm,” shared Alex. He also talked about the self-learning Twitter bot by Microsoft and the face recognition technology.

While planning a future career Alex advised to consider the patterns, comparing the profession of a linesman electrician in the early 19th century – the highest sought-after job – to a software engineer today. He also explained that currently coders translate human context, requirements and environments into machine language, basically turning modern reality into a binary system. The present-day AI models are capable of learning and writing code on their own. According to Alex, with the arrival of AI the job of a coder will not go away; it means that now a lot more people will have the capability to create. He said that the future was in the creative field.

When talking about the use of AI in healthcare industry it’s been noted that AI algorithms are capable of much more than mere gate-entry technology, remote temperature measuring, etc. AI helps in modeling and operationalizing general healthcare according to Alex. It helps model the spread of the virus, identifies when and where to deploy medical resources and even assists with managing hospital capacity. “The real opportunity there is not in the way COVID is going to be dealt with, but our readiness for something similar in the future,” concluded Alex.

Toward the end of online presentation both experts shared their opinion on the risks that we are yet to see because of this sudden increased use of technology.

“Overreliance on technology is one of them,” said Simon Sulyma. While describing a hypothetical situation as to what happens when technologies suddenly stop working, he drew an example of Canada Revenue Agency, that had been recently hacked and just shut down its online operation leaving many people puzzled as to how to pay taxes or apply for aid. To decrease or eliminate the risk of a security breach or data loss Simon recommended to be very cautious when clicking on the Internet link from unknown sources, use strong passwords and multi-factor authentication where possible, apply security updates on your devices and apps, run an antivirus and personal firewall as well as make regular backup copy of your important information.

In conclusion, the experts talked about the new COVID Alert app that the Government of Canada had recently released. Being very technically savvy both Simon and Alex attested to the fact that the contact tracing capability introduced by Apple and Google to mobile devices follows the highest standards to protect privacy of its users. Reportedly, the system does not collect any personally identifiable information, but through the exchange of random codes over Bluetooth it keeps you informed of the possible contact with the infected person helping to stop the spread of COVID-19.

If you want to learn more about other consequence of the increased reliance on technology and possible risks associated with it, especially in the geopolitical context, feel free to watch the full episode on the Ukrainian National Federation Ottawa-Gatineau YouTube channel: https://bit.ly/34IiTjY